My last post was heavy. It was so heavy, I almost didn’t have the strength to publish it. I feared being vulnerable. I was worried that people would be annoyed by a post that was more personal and less like a nice, safe essay. I even thought some people would be mad that I foisted my anxieties and fears on them, or disgusted that I mentioned anything to do with spirituality.

None of that happened.

Instead, the whole world reached out to me. I got thoughtful comments on the post. A friend I haven’t seen in years contacted me directly, with kindness and care. Others sent direct messages, and one lovely person even sent me a beautiful travelogue of  a recent adventure. And, as if the effect of being brave enough to admit to having lived through some darkness spread beyond the digital expanse of the post, another friend who knew nothing about it chose last week to remind me she’s always here for me, no matter what. It was the best week. I felt so loved.

Thank you all for being there for me.

Beautiful blooms near my bus stop – gorgeous as your friendship!

What you have just witnessed was a code swarm. When a programmer writes code, it is saved in a file. As developers complete tasks, they check in their files, ‘commiting’ them to a repository. Each commit is a historical data point linking the file and the person who changed the file. The animated code swarm is a visualization of that historical data. This is an overly simplistic explanation, but hits the points that matter for the following discussion.

When I watch a code swarm, I’m overcome by existential wonder. I don’t see files or code. I see humanity.

The swarm is a visual representation of the interconnectedness between the developers who shared those files. Their common creative pursuit linked them in ways both beautiful and fleeting. Developers zoom onto the screen, take a central role as files orbit around them. They bob nearer or farther other developers, swapping files, sometimes appearing to be like binary stars breathing each other’s life force. Then, just as unpredictably, they separate. Every now and then, a developer departs the field of vision, their work on that ecosystem done. Their files stay, building new links between the developers who remain. The footsteps of each contributor are stored in the commit history and their voices stay in the code base, echoes of the past. The code swarm is an artifact not so much of programming, but of the very human act of collaboration.

When I watch a code swarm, I am prompted to visualize my life. I picture the various stages of it and the people who would have been influential. My swarm would start with only a few actors: Mo, Poppy, me. Then my sister would join us, and there would be four of us connected by shared habitation, experience, and name. When I went to college, my icon would fly farther from the others, and new friends and professors would gather around me. Sometime in my junior year, Mr. Aniko and I gravitate to one another and here we are still, a universe of two. Thinking of my life swarm makes me realize how tenuous and circumstantial most relationships are. When someone zooms out of my frame of reference, I am left with less than files and timestamps. I’m left with imperfect memory. I’m left with sweet melancholia and an awareness of the fleeting nature of most situational friendships.

Perhaps this is why I love books. In them, relationships never end. If someone zooms off the screen, I need only go back a few pages to have them back again, exactly as they were and without any of the fuzzy imperfection of my own mental camera. There is a permanence that is heartening, a good swift kick to the devouring maw of time and entropy. There is definite order and complete crystallization; the lives in books are, in that sense, more solid than the ones you and I are living.

Yet books don’t exist in vacuums. They are their own universe. They talk to each other, conversing across centuries, language divides, and cultural differences. Allusion is magic. Stolen Climates talks to Calvino’s The Agentine Ant, Jackson’s The Haunting of Hill House, and Salinger’s A Perfect Day for Bananafish. It is homage and a recognition that I do not come first and could not have built what I did without their precedent. I am honored by my timeless meeting of those authors, just as much as I am honored by the people I have met at school, work, or on this blog. We are a perfect and fleeting ecosystem.

Be thankful, but without any grasping at that which must pass away. Experience the perfection of the friendships you have now. Don’t put off that lunch with your co-workers because time is fast and soon, you’ll be just people who used to work together. Oh, you can LinkedIn and Facebook ad infinitum, but life’s not like a book. You can’t just turn back a few pages and restore the connection you had. You have this moment, this day, these people. Go to them.

This post is dedicated to Mr. Aniko, my husband of eleven years and my best friend for fourteen. I love you, Mr. Aniko! You are my perfect other. 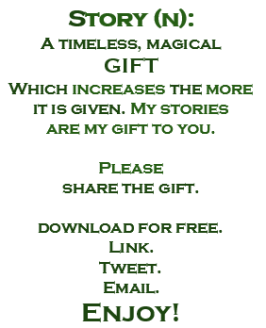