If you were on the internet at all in the past two weeks, it would have been hard for you to miss the links to Atlantic’s cover article, Why Women Still Can’t Have It All by Anne-Marie Slaughter. The bold claim in the title piqued my curiosity, and I started to read. My unease grew with the page count, mostly because the ‘all’ described in the essay has nothing to do with my life. I don’t want children. I don’t want a high-power job running either a country or a company. I don’t want advanced graduate degrees. I don’t want to need a job that pays me enough to hire a nanny to step in when I’m too busy running whatever it is I’m supposed to want to run. I don’t want Slaughter’s ‘all,’ at all.

I celebrated my thirty-fifth birthday at the end of June. I’m old enough to have had dreams that didn’t come to fruition. Old enough to know that there are hard limits to what can be attained by me, given who I am. Old enough to find joy, rather than despair, in those facts.

I lead a simple life. I like to go to sleep early. I like to stay in at night. I like to eat lunch at a picnic table. I like to walk my dogs. I like to talk with my husband, laugh with him, sit quietly with him. I like having a place to think. I like day dreaming. I like to travel, but not too often, because I love being at home. When people ask me if I’m doing anything exciting on the weekend, I always say no. I don’t need to do something special or ‘exciting’ because I’m fulfilled by what I have. I love the way I spend my days. Not one of these factors was part the ‘all’ described in the Atlantic, but they are each essential to my sense of fulfillment, my sense of ‘all.’

I don’t run a company or country. I don’t even lead a team. If I change the world, it won’t be in the boardroom or public office; it’ll be one human kindness at a time.

I’m not rich, but my bills are paid. I don’t frequent fancy restaurants, but I always have food. I don’t drive a luxury car, but I have a reliable vehicle with working AC. I have a book budget, but with indies producing quality books for reasonable prices, I haven’t even come close to my limit.

Writing is an important part of who I am. It is a huge piece of my ‘all,’ an integral act of devotion to the mystery of being. I could lose almost everything, but if I keep my freedom and ability to write, I will thrive.

Sure, there are always nicer things, fancier places, more ornate houses on less run-down roads. But the boring, simple fact is that I’m happy with the ‘all’ that I have, even if it doesn’t measure up to someone else’s estimation of what ‘all’ includes. This is a powerful, freeing realization.

Aniko Gets Kreativ III:  I  have it all.

I’ve fallen behind in my Kreativ Blogger nominations, but I’m exited to tell you about my newest, wonderful nominee! Jacquelyn Smith is a fantasy author. Her blog , Wayward Scribe, is entertaining, encouraging, and responsive to commenters. Please join me in congratulating Jacquelyn! If you read fantasy, I’m sure she’d be thrilled if you joined The Tribe of the Wayward Scribe to receive newsletters & a free download of one of her stories!

Until next time, jazz hands! xoxo

My Uncle Ernie was the first grown-up I ever met who was a dreamer. His child-like sense of wonder shifted reality’s boundaries, and intimated that the magic of imagination need not dissipate with age. Uncle Ernie had the greatest, most sonorous voice and a wonderful, honest laugh. He wasn’t a parent, which probably explains why he was also the first grown-up to ever let me drink a beverage somewhere other than the kitchen. I thought that was unbelievably cool, not only because it’s convenient to have a cold glass of milk when you’re reading, but also because it made me feel grown up. I wasn’t, though, and in one of my innumerable fits of childhood clumsiness, I upended the glass. Instead of being angry that I’d made a mess, Uncle Ernie got me another and told me stuff like that happens to everyone. He understood my nature: not just the clumsiness, but the fact that I, too, was destined to be a dreamer.

Aaron was a friend of mine. He was always the guy that made me smile at work; if you met him, I’m sure he’d make you smile, too. He was very ill, but Aaron never let the harshness of reality – the incalculable unfairness – temper his joy of living.

Last year, within months of one another, Uncle Ernie and Aaron passed beyond this realm.

I was ill recently. Three AM on a Saturday, curled up in a little ball on the bathroom floor, in possibly the worst pain of my life, it occurred to me that I could die. Not someday: right then. I thought of Mr. Aniko, my sister, my parents, my nephews. I thought of my writing. I thought of how I would miss all of that, and how much would be left unfinished. My sickness forced me to acknowledge, in a deep and unquestioning way, that there is no placating ritual that assures longevity. I can’t know what is going to happen, but I do have a choice. I can choose to mark out the days of my life counting down, as if life were a sentence to be served. Or I could choose spend my time in in grateful pursuit of joy. In other words, I can live now, or hope that I’ll make it to a moment that might never come.

On a whiteboard in my kitchen, I used to track weeks until my projected retirement. I have replaced the countdown with my new mantra: Today Is The Adventure.  Life isn’t some magical moment in the future. It is right now. Today.

I don’t believe in countdowns.

My inspiration for this post was Hunter Shea’s poignant look at his realization that life is precious and fleeting. Take a moment to read what he has to say. Then, congratulate him on his nomination for the Kreativ Blogger award! I am passing it along via  Kim Koning, who honored me with the nomination.

The nomination comes with a badge:

It also comes with rules, which I am going to (sort of) break.

Rule 1: Mention the person who nominated you, and link to her blog.

The first rule I won’t mess with, not only because I adore Kim and think you will, too, but also because I’m grateful she thought to nominate me. You may know Kim Koning from #storycraft,  as a member of #TESSpecFic, or as a contributor toTales for Canterbury. Kim is a wonderfully emotive writer, an authentically engaged member of the world-wide writing community, and a friend.  Please check out her blog, Wrestling the Muse, and follow her on Twitter at @authorkimkoning.

Rules Two and Three, I’m going to bend. Most Kreative Blogger entries give a bullet-point list of seven disembodied facts or tidbits about the writer. Instead of listing seven things, I’m going to write seven vignettes illustrating something interesting. In addition, while the standard Kreative Blogger response lists seven nominees in the same post, I will list one per post. This is mostly to give me time to find seven bloggers I enjoy who are not already nominated. If you have suggestions, please send them. I will consider any entries, writing related or not, provided that the blogs are fresh, enjoyable and, of course, creative.

The Faerie or the Dinosaur?

I have two nephews. The oldest is almost ten, the youngest has just turned five. The difference between their ages is almost exactly the difference in age between my sister and me. In a sense, watching the boys is like getting to look back in time to how my sister and I must have been when we were children. If we were boys, that is, and if I had been the younger of the pair. I say that because my younger nephew’s dreamy, imaginative approach to the world strikes a chord of recognition within my soul. I know him because he is like me.

My writing room is filled with trinkets and baubles that have personal meaning. My desk faces a bank of windows, and on the sill is where I keep my talismans. Last weekend, my younger nephew found a little sponge amongst the trinkets. It came from one of those capsules that looks like a pill, but when you soak it in water, the gelatin capsule dissolves and the compressed sponge blossoms. I’ve seen them sold in packs at the grocery store, often claiming the sponges will look like farm animals. The pack I got, though, was supposed to look like mythical creatures. The sponge my younger nephew found was a faerie. 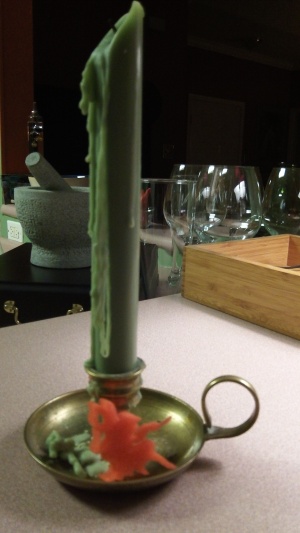 He held the faerie up to me and said, “What kind of dinosaur is this?” I said, “That’s not a dinosaur, it’s a faerie.” He wasn’t convinced, so I pointed to each part of the sponge and explained what it was. Here are her wings. Here are her legs. Here are her arms, and this is the book she’s reading.  He watched patiently, carefully, thoughtfully. Then he said, “Well, why does she have a dinosaur tail?” He pointed at the draped hem of the faerie’s dress. Suddenly, I understood my mistake. What I called ‘wings’ were really the bony plates on the back of a stegosaurus, the ‘book’ was a spindly leg, and the ‘dress’ was a stubby tail.

My first Kreativ blogger fact is this: I have seen a faerie turn into a dinosaur.

My nomination for the Kreativ Blogger award is my friend Mari Biella. Her blog is thoughtful and well-written. She recently published her debut novel, The Quickening – if you like haunted house stories, you’ll love Mari’s story.